I made these copycat Roscoe chicken and waffles recipes which are one of the best and delicious combos out there. Visualize a perfectly seasoned, juicy, and crunchy fried chicken on top of a crispy and fluffy inside malted Belgian waffles.

If you haven’t ever had the dynamic duo of chicken and waffles, you really need to try it. This crispy waffle recipe is the perfect complement to the “better than the colonel” chicken I make as its companion.

You are watching: How To Make Roscoe'S Waffles 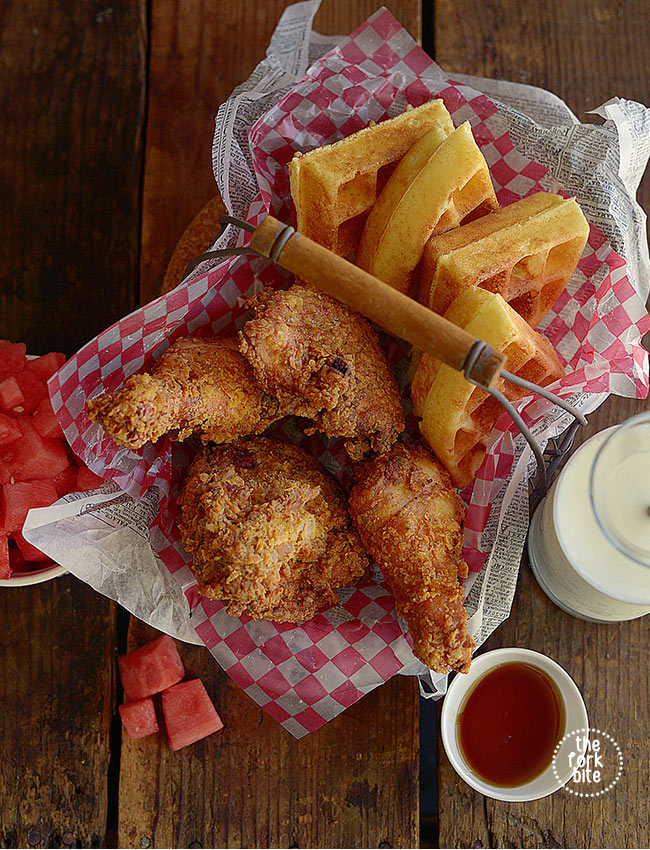 While I don’t know how true it is, I’ve heard the chicken and waffle combo was started in New York City in the Harlem district, when the little hole in the wall all-night diners created dinners for club patrons and the musicians who played with them.

It has its roots in soul food and became very popular in LA, primarily because of the popularity of Roscoe’s House of Chicken and Waffles. 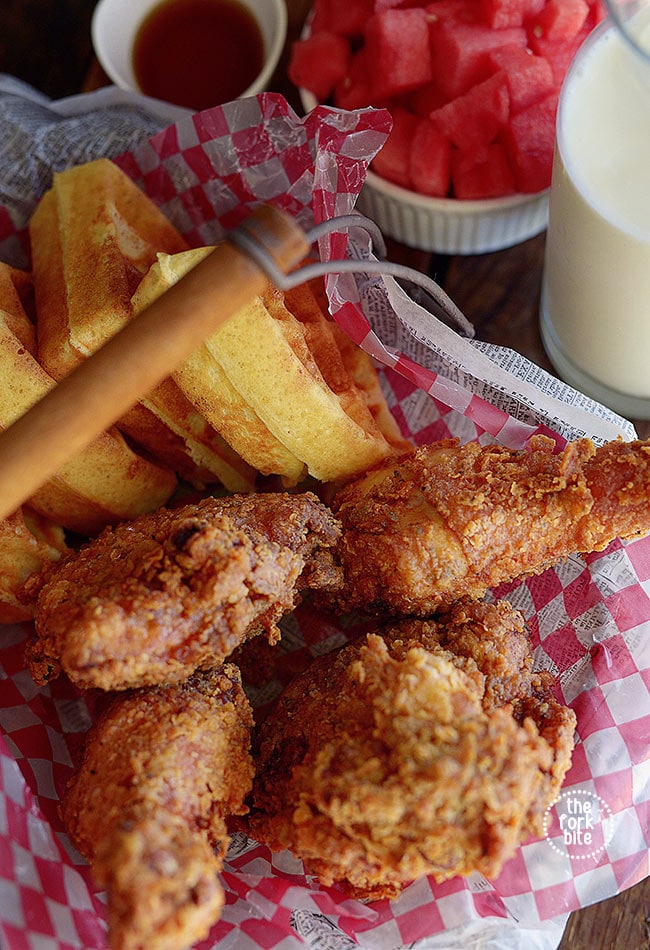 It doesn’t matter where the combination came from.

Both the chicken and the waffles have to be superior for it to taste its best. If you’ve tried my waffle recipe (check the link at notes below), you know it’s so delicious you will want to eat it at every meal.

I believe I’ve found the perfect chicken recipe to match that delectable flavor and create a dynamic duo you’ll eat morning, noon, night, or as a midnight special.

You use quite a few seasonings to get that special flavor, luckily almost everyone has them in their cupboard.

You need two teaspoons of each; garlic powder, dried oregano, freshly ground black pepper, paprika, and a half teaspoon of cayenne pepper. Mix them thoroughly in a small bowl.

You’ll use two tablespoons right away to mix with a cup of buttermilk, one large egg, and a tablespoon of Kosher salt, and set the rest of the spice mixture aside for later.

Toss a whole chicken cut into pieces in this mixture to coat it and then put chicken and mixture in a ziplock bag.

Seal the bag and refrigerate for at least four hours or overnight if possible. Make sure you flip the bag several times to ensure all parts get coated. 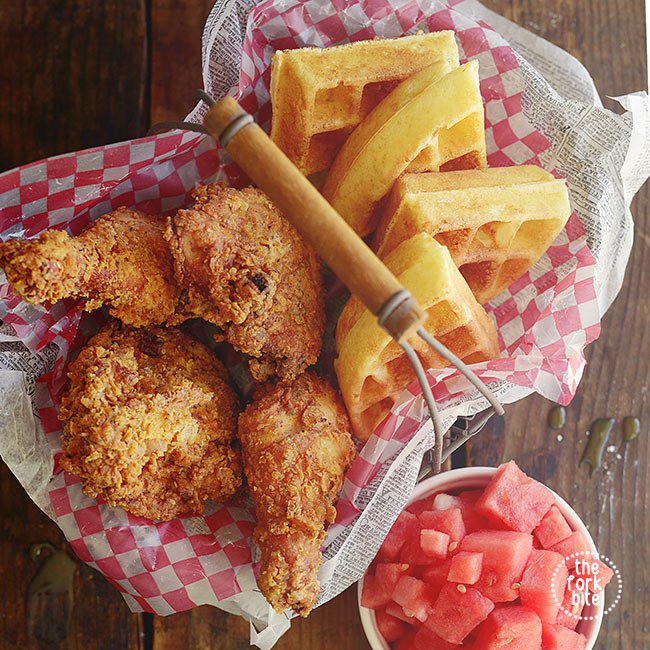 When you’re ready to make this delicacy, you don’t need any more ingredients. You’ll whisk one and a half cups of flour, 1/cup cornstarch, one teaspoon baking powder, the rest of the spice mixture, and two teaspoons of salt together.

When it’s thoroughly blended, add three tablespoons of the chicken marinade and work it into the flour thoroughly. It will be “a bit lumpy,” but give the chicken the shaggy crisp crust we’ve all grown to love.

Allow the excess marinade to drip off and then toss the piece in the flour mixture, leaving it there while you do the next. Toss again to ensure a good coating.

1 Mix the spice mixture ingredients like black pepper, paprika, oregano, garlic powder, and cayenne pepper in a bowl. Set aside. 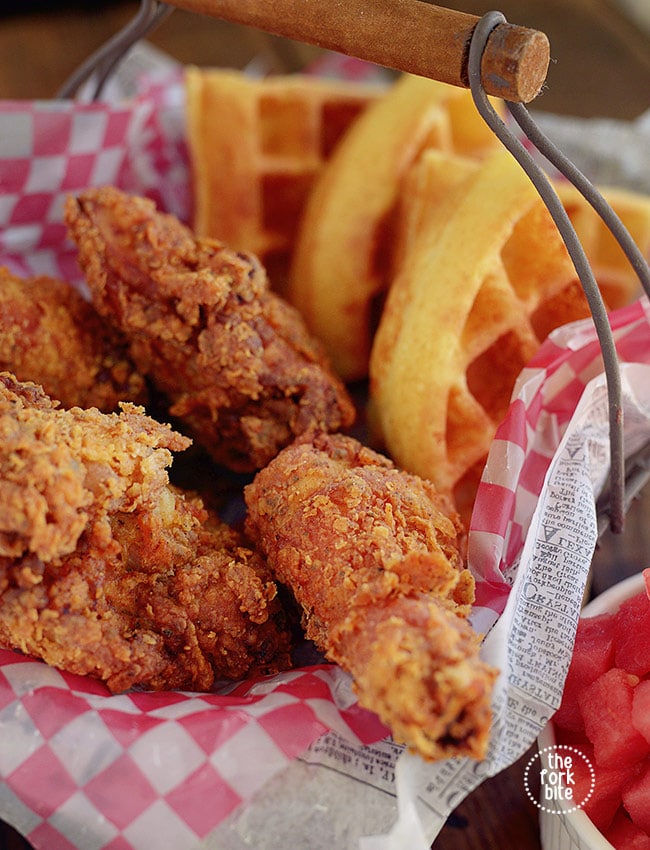 2 In a separate bowl, combine the buttermilk, egg, 1 tbsp salt, + 2 tbsp of the spice mixture. Give the marinade a good whisk, then toss the chicken to get a nice coat.

3 After that, you can transfer the chicken and the marinade to a Ziploc bag. Place in the fridge for at least 3-4 hours or overnight. Flip the bag or stir the chicken halfway to ensure each piece is thoroughly coated.

Prep the Flour Mixture or Batter:

4 In a large bowl, combine the cornstarch, flour, baking powder, 2 tsp salt, and the leftover spice mixture. Take 3 tbsp of the chicken marinade and mix it to the flour mixture using your fingertips.

5 Take 3 tbsp of the chicken marinade and mix it to the flour mixture using your fingertips.

6 Now, take one piece of the chicken from the Ziploc bag, let the extra buttermilk liquid drip off. Drop it into the flour mixture and give it a nice coat by tossing both sides.

7 Continue the same process for each chicken until thoroughly coated. It also helps if you press your hands to get the flour adhered to in a thick layer.

Preheat the oven to 350°F and adjust the rack to the middle position.

8 While the oven is preheating, prep your wok or deep fryer by adding the oil and heat it to 350°F ( 175°C) over medium-high. Maintain the temperature by adjusting the heat not to let the oil reach more than the required temperature.

9 Place the coated chicken into a fine-mesh strainer and shake to get rid of the excess flour. Lower the chicken pieces in the oil skin side down. Remember, don’t overcrowd the pan while frying the chicken.

10 Once you dropped the chicken into the pan, the oil temperature will shot down to 300°F. The key is to maintain that temperature between 300˚ to 325˚ for the frying duration without burning the crust.

11 Let the chicken cooked and turned to golden brown on the side while frying. Refrain from moving the chicken to check for the doneness until it has fried for at least 3 minutes. Otherwise, you may rub off the coating.

12 Use a tong to flip the chicken cautiously and cook it until the other side is golden brown (about 3 minutes). 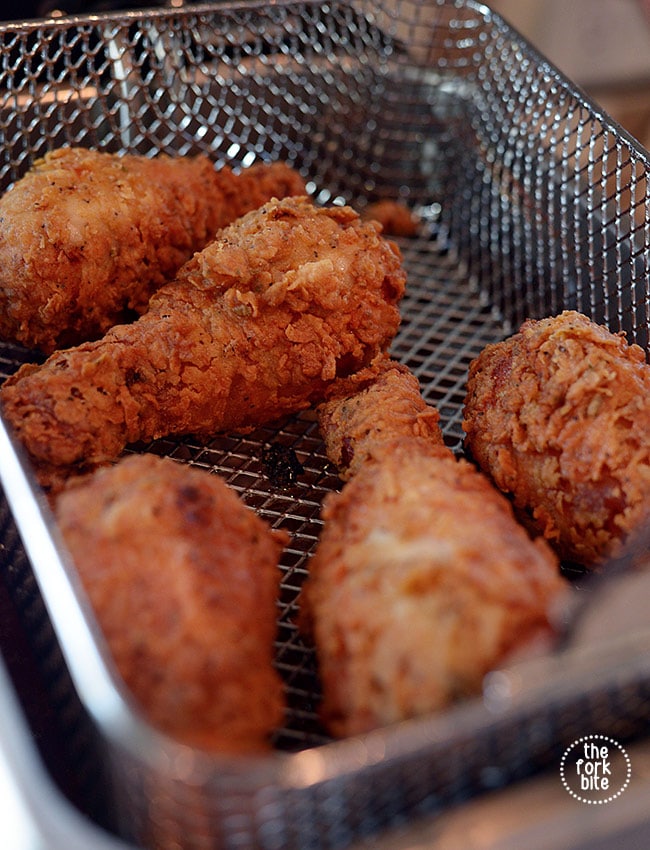 13 After frying the chicken pieces, transfer them into a wire rack and bake them in the oven. Cook for 5 – 10 minutes or until the thickest part of the breast reads 150°F through the inserted thermometer.

14 Once the chicken pieces are done, transfer them to a cooling rack to drain excess oil. Serve immediately.

Reheating fried chicken in the oven

You can store the cooked chicken in the fridge for up to overnight; then, you can reheat them in the oven.

Reheating fried chicken in the microwave

Reheating chicken in the microwave is the least I want to do.

Microwaves can be tricky in reheating food, as they often result in soggy chicken due to uneven reheat. Noticeably, the texture will never be the same.

However, if you want to give it a try, follow these steps:

Vanilla Beans How To Use | Coral's Blog – Food Blog...

How To Make Peach Pie Filling With Canned Peaches | Coral's...

How To Make A Clamato Beer | Guide to the Kitchen...